Description
James Greig believed that pottery could be seen as standing between sculpture and architecture. He wrote of his “consuming involvement” with Frank Lloyd Wright:

“Studying every one of his documented works, absorbing lessons of a masterfully artistic handling of space, solid and voids, of organic unity and of the spirit of materials. My own designs for buildings usually came out with the circular or spiral forms – unpractical for the times.”

Working with the plasticity of clay enabled Greig to realise more ambitious such as this angular Solid and Void work, which led onto his development of the impressive scaled Transformation series (also in The Dowse permanent collection). He was particularly interested in showing how the forms he made were defined just as much by the negative space or ‘voids’ cutting into and surrounding the work as the solid masses created by the clay itself. 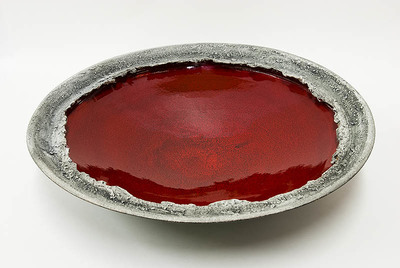