Description
A notched internal silver setting secures the shell and coconut togther. Similar to a bangle made for Bone Stone Shell. Bone Stone and Shell was a pivotal exhibition of New Zealand contemporary jewellery defined as ‘symbols of identity for a generation who wanted to understand themselves as citizens of Aotearoa a bicultural nation living on set of islands in the South Pacific’. Bone Stone Shell could also be considered as part of the wider global critique of preciousness during the 1970s and 1980s. New Zealand practice had a particular emphasis on natural materials and acknowledged the adornment traditions of Māori and Pacific peoples. Alan Preston is one of the founding members of Fingers jewellery gallery cooperative beginning in Auckland in 1974. 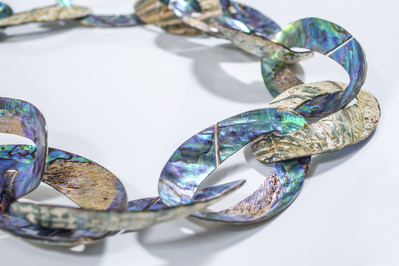